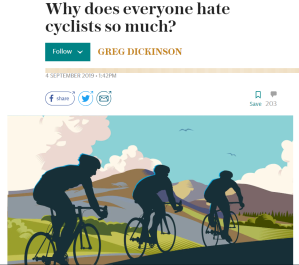 The Bega District News reports that a number of cyclists will be stopping in Bega as part of the charity ride Bondi2Berry which raises money for dementia.

The Canberra Times reports the death of a cyclist who was embarking on a lengthy charity ride through Europe.

Greg Dickinson from The Telegraph, UK, asks “Why does everyone hate cyclists so much?”  Many people were happy to answer him in the article comments section.

The city of Bendigo is running a forum to address the rising local road toll. Part of this strategy is to enforce the one metre rule for passing cyclists, which is yet to be implemented in Victoria. 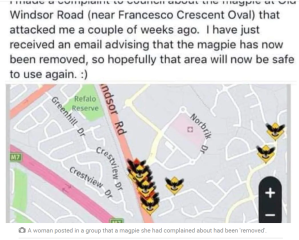 The Daily Telegraph reports that a magpie was shot following a complaint of swooping by cyclists.  The Facebook post has attracted almost 1000 comments to date, with many highly critical of cyclists.

With Sydney’s light rail now in operation, the Sydney Morning Herald explains how residents can legally jaywalk, cycle and drive near Sydney’s new light rail. The Facebook comments are varied, but appear more focused on pedestrians looking at their phones and the legalities of jaywalking, than the actions of cyclists.

Matt Holden from The Age responds to the recent Victorian Government announcement that Melbourne’s share bike scheme will be scrapped. He identifies a number of problems with the scheme, including the location of the docking stations, helmet laws, and cultural barriers to cycling.

The New Zealand Herald reports that there has been strong criticism of government plans for a $2.6 million upgrade to an Auckland walkway to accommodate cyclists. Comments in the Facebook thread focus on the high cost, and are highly critical of government spending.

The New York post reports that New York City has ‘aggressively’ pursued a bike-friendly agenda, but has done little to prevent accidents between cyclists and pedestrians,