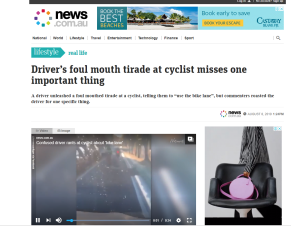 A video of a driver hurling abuse at a cyclist who is shown riding in a bike lane in the inner-city suburb of Newtown, Sydney, was picked up by at least two major news outlets this week. Originally a Snapchat video picked up and widely distributed by meme account Brown Cardigan, News.com.au shared the story via its Facebook page, and the story was also shared by the Daily Mail UK.

So far the News.com.au Facebook thread has attracted 95 comments, with many users taking the opportunity to firmly place blame on the cyclists (despite the tone of the original article) and engage in debate about cars vs cyclists and contest the relevant road rules. Anti-cycling sentiment did however meet fierce opposition from other apparent cyclist and non-cyclist Facebook users.